Showing posts from June, 2018
Show all

DANIEL’S INTERPRETATION OF THE IMAGE 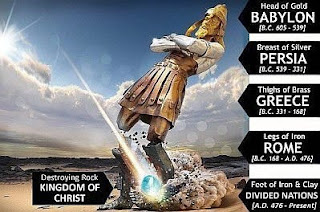 DANIEL’S INTERPRETATION OF THE IMAGE Daniel 2:19, 28 to 36. ‘The secret was revealed to Daniel in a vision of the night, and Daniel blessed the God of heaven … “There is a God in heaven Who reveals secrets.  He has made known to King Nebuchadnezzar what it is that will be in the latter days.  Your dream and the visions in your head while on your bed are these:  As for you, O king, as you were lying on your bed thoughts came into your mind about what will come to pass hereafter, and He Who reveals secrets was making known to you what will come to pass.  As for me, this secret is not revealed to me for any wisdom that I have more than anyone else living, but in order that the interpretation may be made known to the king so you may know the thoughts of your mind.  You, O king, saw and beheld a great image.  This image which was mighty and of exceedingly great brightness stood before you and the appearance of it was frightening.  Its head was of fine gold, its chest
Read more
More posts